Jackie Lesnick and her team just came from the high of a 24-hour Adventure Time game jam, where they managed to concoct a fairly decent barebones adventure game engine. They figured if they took the time spent on the jam and multiplied it by 30, they should be able to make a quite playable mobile game. Thus, all they would need is enough for a few artists and a programmer to get by for a month, which would be, ohhh.... $4000, right?

And so in the Winter of 2012, the Dungeon Panic Kickstarter went up, with the goal of exactly $4000. The people responded quite positively, and we were feeling quite good about it. In the end, we made three times our goal.

Nevertheless, we did what we could. The artists designed nearly all the tiles and sprites, the musician musiced, and the programmer programmed as much as he could while Jackie tried to keep the hype train going... but inevitably the money ran out and real life ended up taking over for everyone.

That being said, we're not here to make excuses; we set an unrealistic goal for ourselves, and let a lot of our supporters down in the end... and for that, we're sorry. While we cannot offer a complete game, we would like to now offer what we did make, which is all the graphic and audio assets created for the game, free for y'all to peruse and use.

This work is licensed under a Creative Commons Attribution 4.0 International License.

Our assets may be used in any free or commercial product, all we ask is that you credit our work.

Update 1/1/2021: Game code has been added. Please note that this code does not include a playable game; we would like to get that out of the way right away! The code was recently uncovered and cleaned up by Dakusan, and in his words:

Running it though won't actually show much of anything as certain areas of the code need to be tied together to show the systems working together. I overhauled the lua scripting engine, but then never updated the actual lua scripts! So right now it just shows the person doing their idle animation like in the screenshot, and that's it.

So it is what it is: code, though it is compilable and, like all the other assets, free to be used by everyone. And with that, there's no more missing content for Dungeon Panic. Everything produced for the game up to its unfinished state in 2016 is now archived and available on this page.

Coding by John King and Dakusan

Produced by Jackie Lesnick superhappyjackie.com
who takes full responsibility for the results of the project, as well as the fact that it took her several years too long to realize she should make this Itch page for it. 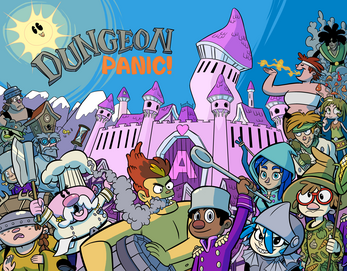